cellars and subway tunnels and they started to build new ones, more appropriate for the situation. Moreover, they installed an alarm system and a supply service for water, foods and medicine. In conclusion, during 3 days, bomb rain destroyed 45 buildings and damaged 75 and caused more than thousand deaths and injured people.

It is estimated that Barcelona owns at least 1300 air raid shelters so when you walk on its streets, think that just under your feet, there are not only tunnels of subway but also the shelter ones. If you want to visit one of them, the city proposes you 2 choices. One is situated in the Gràcia district and the other is in the Sants Montjuic district. 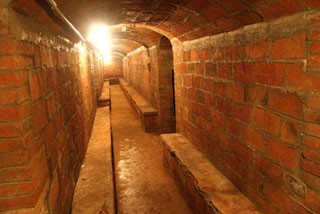 I will start first by the shelter located under the diamant square in the Gràcia district. Built 12 meters below ground which walls and ceilings are covered with bricks, it can shelter around 200 people and its tunnel stretches out until the guilleries street which also includes 2 toilet sections, one for men and one for women. To visit it, you will have to contact Taller d'Història de Gràcia (passeig mare de déu del coll 79 – official website - only catalan version).

The Refugi 307 is the name of the 2nd one that you can discover located at the street nou de la rambla 169. The original project was 400 meters of tunnels allowing to shelter around 2000 people but at the end, only half was built with 2,10 meters high and between 1,5 and 2 meters wide. With 3 different entrances, its construction was only possible with the participation of the citizen living in the district, encouraged by the survival.

During the visit, you will discover different spaces like a bathroom, a sickbay, a children room… and also other ones converted for other purposes after the war. If you want more information like price, time schedule… check out its official website (no english version).