and sunday. In Barcelona, there are 73 hospitals/clinics and 10 pharmacies open 24h and 7 days. Beside that, some pharmacies have an on duty person during night time and sunday.

Hospital Clínic i Provincial (c/ villarroel 170) and hospital del Mar (passeig marítim barceloneta 25-29) are amongst the bigger ones and located around the downtown. Now I will describe you a particular hospital, the hospital Santa Creu i Sant Pau (c/ sant antoni maria claret 167). 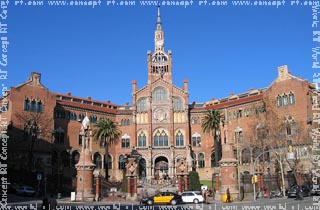 This hospital has a very particular architecture and the most ambitious art nouveau work by the famous architect Lluís Domènech i Montaner (1850-1923) who converted it as the most significant work of catalan modernism in civil architecture.

You have to know that, before the 11th century, the site was occupied by small huts to help poor sick citizens and the hospital Santa Creu was built in 1401 by Guillem Abiell in order to join the 6 existing hospitals, scattered around the city, in the same place.

At the end of the 19th century, it became too small for the growing city and medical investigations so a new part was built and in 1902, the first stone was laid and the name Sant Pau has been extended to the old name because the benefactor of the work, the banker Pau Gil, wished this way.

This was the only hospital in Barcelona for five centuries, until the early 20th century when it became insufficient for the city's rapidly growing population.

Since it is near to Sagrada Familia, I will counsel you to take a little time, after visiting the basilica, to walk until the hospital to visit it if you are a fan of architecture. You just have to walk up the avinguda de gaudi street until the end and it will take you more or less between 15 and 20 minutes.

The other way is to take the metro L5 direction Horta and get off at hospital de sant pau station. More practical, the general number for emergency is 112 and for ambulance is 061.