day 3 with parades. During more or less 2h, parades of different groups will walk on the streets and they will throw candies not only for children but also for adults. Every group has to salute the city hall of the district located at the vila de gràcia square.

For the braves, you can do the traditional hiking from this district to a village situated at Sant Cugat, up to a mountain. For more information, check its official website.

Another one for your kids, it is the FLIC (Festival of Arts and Literatures for Children and Junior). It is celebrated the first sunday at the museum CCCB (calle montalegre 5) from 11h to 13h. The entrance is free so don’t doubt to bring them there. To know more, check its official website (no english). 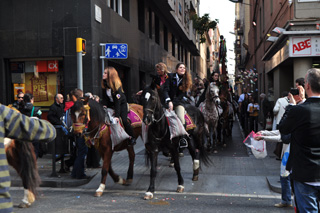 The first saturday is celebrating the barbecued onion festival just in front of the nativity façade of the Sagrada Familia. A big barbecue will be lighted where people will cook the famous calçot (green onion) so if you want to try this catalan specialty, be there. To know more, read my topic Festival of calçotada, the barbecued onion.

The most annoying thing is that when 2 events are done at the same time and we have to choose so this is what will happen for people who like beer and old cars because at the same weekend, there is the international rally of veteran cars between Barcelona and Sitges.

The saturday between 10h and 17h, people can see an exhibition of cars dating before 1925 at the Illa Diagonal mall (avinguda diagonal 557). The sunday, they will go to the sant jaume square for the rally. The first one was done in 1959 and actually, it is considered as the second oldest race of Europe after the London-Brighton veteran car run.

In fact, they will arrive on this square between 8h30 and 10h30 because the rally will start at 11h to arrive around 12h30 at the aiguadolç harbor of Sitges then they will go to the downtown, exactly at the fragata square for people to see them until 18h. For more information, read my topic Barcelona-Sitges, international rally of veteran cars.

I will end by the Hong Kong film festival celebrated in the Asia House (avinguda diagonal 373) during 1 week starting from the 4th thursday of the month. No need to tell you that you could watch asian movies and to know the full program, go to its official website.