The statue of liberty of Barcelona in Arus

works in catalan and 10 in castilian. Moreover, he got involved in politic during the First Republic. For example, he was a co-founder of the Catalan Center and he participated in the 1st and 2nd Catalan Parliament. In 1866, he entered at the freemasonry called Lògia La Fraternitat, a social movement and in 1886, he was elected as great master of the catalan masonry.

He also promoted and managed different magazines and periodicals in order to spread easier his ideals, his democratic values, the freedom and the tolerance in a very strict society at this time. He died in 1891 and his legatee was Valentí Almirall i Antoni Farnés who used his legacy to create the Arus public library.

The construction of the building was done by the architect Bonaventura Bassegoda i Amigó, the decoration by Josep Lluís Pellicer and of course, without forgetting talented artisans who participated in this important work too. In 1894, one year before the inauguration, Almirall invited journalists, bibliophiles and artists to discover it although some details were not yet completed and famous people like Jacint Verdaguer, Joan Maragall, Lluís Domènech i Montaner… accepted the invitation.

A beautiful stair surrounding with ionic columns will lead you to its main entrance where a replica of the Statue of Liberty will welcome you. All the interior decoration is made of fine woods and the floor is designed by white and black squared pattern.

The BPA (Biblioteca Publica Arus) is located at passeig de sant joan 26 principal and it is opened the monday, wednesday and friday between 9h30 and 15h. If you want more information, check out its official website. 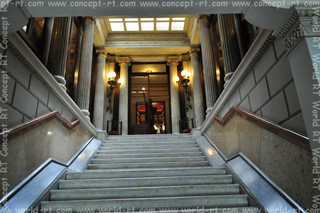