La rambla street is close to this one and I take it only to go to La Boqueria to eat something in one of the bar restaurants. La Boqueria is the famous fresh market at Barcelona where I can smell fresh seafood and the iberian ham, see some exotic fruits... a good place to buy food. 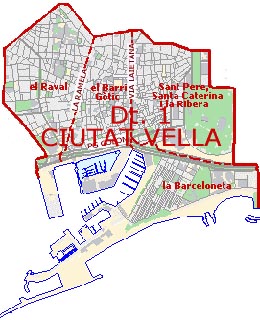 By taking first the little bonsuccés street and after elisabets street, I go directly to the Contemporary Art museum and the Contemporary Culture Center located at plaza del angels. In the middle of the way, there is a nice place plaza de vicenç nartorell to take a drink.

In night time, the joaquín costa and rambla del raval streets are animated with its particular bars and both are where spanish people like to go to have fun. And next to it, during day time, since I am a fan of electronic things, the ronda de sant antoni street is full of computer, mobile, camera... shops.

Down la rambla, during the weekend, there are little souvenir and antic markets that my girlfriend is very fond but not me and it is close to the port. Crossing the bridge, I arrive at Maremagnum, the little mall of the port where in night time, the first and last floor are taken by night clubs and bars. Sometimes there are some street exhibitions like tai chi for example.

I still don't go yet to the IMAX, maybe one day !!! It is a big theater located in this mall to watch documentary film in 3D and next to it, there is the Aquarium museum. If you like fish, it is nice to see and you can record penguin !!!

If it is not too late, I walk until the Barceloneta beach or to the Parc de la Ciutadella. It is in this neighborhood that I renovated my NIE or for european foreigners who wanted to live here to request it. With the time, I don’t like so much this beach because it is very dirty and now I prefer to go outside of Barcelona to swim.

If you don’t have vertigo, take the cable railway located at passeig de joan de borbó which will bring you to the Montjuïc castle and you will have a nice view if the weather allows it of course. The city park, close to the Francia train station, is very pleasant to walk and it is here where you can find the zoo. In the opposite side, there is the Arco de Triunfo (triumph arch).

And if it is already night time, I prefer to walk until the Born (in the Sant Pere, Santa Caterina i Ribera neighborhood) to dinner somewhere. It is one of the popular place of the city and mainly, I choose a place between argenteria street and passeig del born according to what we feel... tapas, pizza, bio, fondue... People come here also to have fun since there are a lot places to dance, to drink a mojito... well to pass a funny night until 3 AM.

If you go at the end of passeig del born, direction to the Parc de la Ciutadella, you will see a big place under construction – it is the new and future market of the neighborhood but during the work, they found out archaeological remains !!!

And if you want to end the night with a “hot” company, go back to la rambla street and just look for the “suitable” woman but everything has a price !!!

La Ciutat Vella is the old district of Barcelona and it is full of pickpockets. During night time, I will not say it is very dangerous but it can be. Let’s say that you have more probability to be attacked and stolen than the other districts. Hopefully, nothing happens yet to me and it is very a shame because there are a lot of nice places hidden in its little and dark streets to be discovered. During day time, you can walk quietly but keep an eye on your bag !!!