I feel great and it is cool skating meanwhile listening music, more when the day has a beautiful blue sky. Close to “plaza glories” and in front of the Agbar tower, there is the mall Las Glories and at the end of diagonal, the mall Diagonal Mar and the Forum where a lot of exhibitions and events are organized like Barcelona Extreme Sports Festival or The Environment. 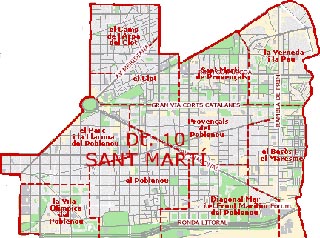 I like the commercial center Diagonal Mar, a mall of 3 floors where the movie theater is one of the best of Barcelona. The first and second floor are for clothes, perfumes, toys, electronic... and the last one is more for entertainment – restaurants, cinema, game shop, bowling, billiard, pool...

Very close to the beach, if I get tired skating, I can go to swim. In this part of the beach, some people practice the nudism since they are few people. If you prefer to be with more people, just go to the area at la Vila Olímpica del Poblenou close to the port.

Normally, when I am at the end of diagonal, I go back a little until I cross rambla del poblenou street. A shopping street of the neighborhood and it is here where I can find the best horchata and in night time, line can be huge !!! It is a spanish drink based on water, sugar and nut or almond. In fact, you can find it everywhere in the city so don’t need to go so far away to try it but if really you want, the place is very easy to spot because there is only one.

Taking this street, I go directly to the beach. This part is called Playa del Bogatell (Bogatell beach) and usually, it is quite crowded from this side until La Barceloneta neighborhood. La Vila Olímpica area has been developed for sportsmen/women to have entertainment during the Olympic Games in 1992. The Yelmo Cineplex Icària (salvador espriu, 61) is a movie theater with 15 rooms where people can watch films only in original version and it is located inside the little mall El Centre de la Vila.

Between Bogatell beach and moll de gregal alley, there is no way to skate all along the beach... well there is a way but it is not done for skaters so I have to take passeig de garcia faria, passeig de calvell and after salvador espriu street until arquitecte sert street and go back to the beach. From here, no problem to skate meanwhile watching the sea and passeig marítim de la barceloneta street is very famous for skaters - every friday night (it not raining) at 22h, a group of skaters is reunited there and during more or less 2h or 3h, they skate around the city with some security measures.

And when it is time to go home, I just take la marina street or sometimes I keep going on until Gracia district to take a drink with some friends.

During night time, this neighborhood is quite animated. Full of restaurants, nightclubs (majority free entrance), bars... to have fun all night. The casino of Barcelona is located at marina, 19 just beneath the golden fish – to get in, don’t forget your passport and you should have 18 years old minimum.

If you are looking for something more “hotter”, you can still go to ramon trias fargas street to find out a sexy person who will pass the night with you.

The Poblenou neighborhood is the old industrial zone of the city where during night, clubbings take control of the area so you can dance until 5AM or 6AM. Depending where you want to go for fun, the entrance costs between 8€ and 10€ (1 drink included) – some of my favorite places Merlin (àvila, 142), Razzmatazz (almogàvers, 122), Ceferinom (pamplona, 88)... if you don’t like them, just walk around and there are more.