exactly june, 24th and the first reference to the carnival dates from 1574 with the costume and masked ball to celebrate the wedding of Matías Cairasco (the famous poet Bartolomé Cairasco de Figueroa was a member of this family).

During many years, the carnival was celebrated in a familial and local environment in which it was mixed with the most wealth masked and fancy dress balls and the costumes of the most humble districts. In this time, it existed already the parades with music although, the parties should be stopped at midnight because it was imposed by the Inquisition for religious reasons.

From the middle of the 19th century, the carnival knew a significant change with the creation of different socio-cultural institutions, which own a high capacity to organize parties for different causes, and the first parades of carriages and chariots with masks.

During the Franco’s dictatorship, citizens had to celebrate it in a clandestine way and it was not before 1976, after the death of Franco (1940-1975), that the carnival took back its right. In fact, it was after the approval of the new spanish constitution of 1978 that it acquired an exclusive program and an organization which allowed it to grow and to spread until to get its own identity.

We can say that the carnival has been able to survive, to preserve and to develop itself during those trouble years and now, the Santa Catalina park is the center of any celebration. Besides the queen and drag queen gala, the festivity includes different activities like competition of music groups, masquerades, “murgas”...

“Murgas” (spanish word) are group of people who sing parody songs. Each year, the theme of the carnival is different and pushes competitors to show imaginations in order to give us, spectators, the most marvelous spectacles of the year during the whole month of february. 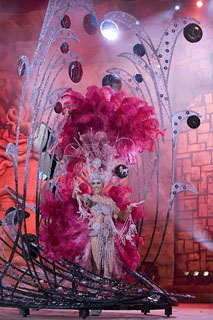