Anyway, foods could be bought over there, a little expensive but it was what we had – a small hotdog for 4.5€ !!! And I can guarantee you that you will have to eat a lot before to be totally full and I’m not a big eater !!! After buying foods and drink, we went to our seats which are very close to the stage but we were in the left side and not in the front. 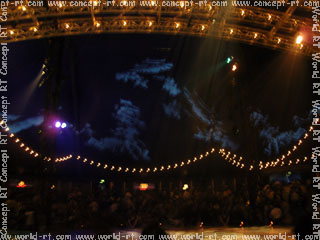 A clown dressed in purple opened the show by showing some people where are their seats or making fun of them like taking the man outside of the tent and conduct the woman in her seat or changing the couple… When the tent seemed to be under control (too bad for latecomers), the music started, the clown proclaimed in french “bienvenu au Cirque du Soleil” and an off voice started to say the rules. After this introduction, performers came out to the stage and the show begun.

1 man and 1 woman were sitting meanwhile the man was reading the newspaper, the woman has been thinking, a little girl in red started to sing and both (man and woman) started to raise in the air with their chairs.

Meanwhile other performers were coming out and we saw a woman playing with a red cloth fabric in the air, a group playing with ropes in the air, a clown dressed in brown picking up a woman spectator to be his girlfriend, the little girl in red coming in and out to sing, a group playing with rope on the ground, a group jumping in the air and be caught by his colleagues, a couple doing balance and equilibrium with their simple body in slow motion, a man juggling with balls, a young woman playing with rings, the same clown in brown picking up 1 woman and 3 men to direct a movie and much more breathtaking performances (i forgot some - bad memory i have... sniffff...).

To end, the little girl in red started to sing a last song and after, all performers came out to the stage to introduce themselves to us, the spectators and the show ended around at 00h40. An orchestra has been behind the stage performing the music and sound effects and all performances have been done without a security net and no animals (policy of the Cirque du Soleil). 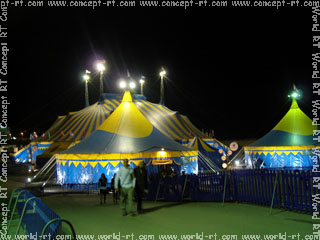 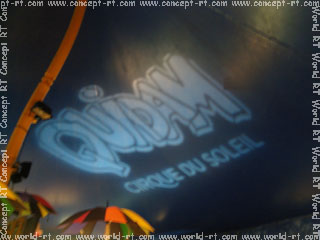 The show lasted 2h30 including 30 minutes of intermission. During this time break, we were able to take a look in the souvenir tent where people could buy t-shirts, DVDs, books, jewelries, hats, masks and more with a price a little expensive in my opinion.

I liked the performance done by the woman with the red fabric especially when she wrapped herself inside and started to play with the form of her body, there was a certain charm and sensuality. I laughed a lot with the clown in brown especially when he picked up the 4 people to direct his movie, a scene when the boyfriend surprises his girlfriend with her lover and he kill him. A tragic scene indeed but with so much laughter until crying !!!

In fact I would like to say that I’m a little disappointed about this new show Quidam because there were not a lot of new performances. Majority have been seen in the other shows and my favorite one is still Alegria.

Le Cirque du Soleil has been founded in 1984 by Guy Laliberté and Daniel Gauthier with the help of the Quebec government. At this time, this circus was already different than the other because of its costumes, its musics and its spectacular show but also the simple fact to not use animals but only mime and acrobat artists.

During its first years, the company only performed in Canada (mostly at Quebec and Toronto) and faced a lot of financial problems but in 1987, they were invited to perform at the Los Angeles Arts Festival. In spite of not having enough money, Guy and Daniel took the decision to go over there and to perform the new show called "Le Cirque Réinventé".

If the show failed and without not having enough budget, they wouldnt be able to come back to Montreal but fortunately, the success was immediate in terms of critic and finance, even Columbia Pictures contacted them to make a movie but at the end, Guy rejected the offer because Columbia Pictures was trying to secure all rights of the production.

From this time, they started to get famous with a period of financial issues but it is only from 1990 that the company got an international fame growing from 73 employees in 1984 to more and less 4000 employees actually across 40 countries producing at least 15 shows over the world.

And now they are back in Spain, at Barcelona, for the new show called "Quidam". This spectacle will open from September 11, 2008 to October 19, 2008. More information can be found in the website Quidam.

For the birthday of my girlfriend, i already bought the tickets. Hope that it will be so great like the previous performances. 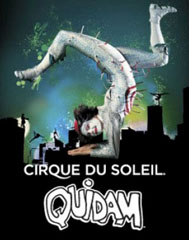