Day of the 3 kings

Depending of the spanish town, the time schedule for the arrival of the 3 wise men and the beginning of the parade may be different. In Barcelona, it is around 16h30 for the kings and around 18h30 for the procession. 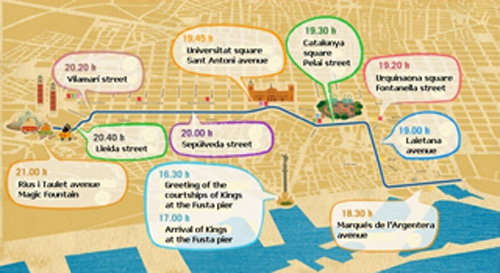 The procession is a parade of spectacles and magic which lasts more and less 3h because it has to cross all the town. At Barcelona, the starting point is at the park of the city (Parc de la Ciutadella) and the arrival point is at Montjuïc fountain (Plaza España).

During its trip, people from the procession throw candies and spanish people with their kids try to be the first to catch them - some come with big bags and hope to fill them the most quicker and the most possible of course. 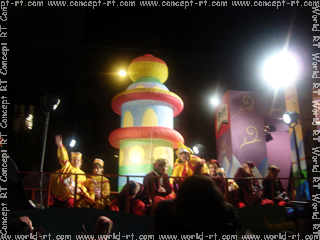 Like you can guess, it is very crowded and people don’t stop to shout “candy… candies… more candies” and with luck, you can catch some. I got only 11 because they failed directly into my pocket :-D but I was there to see the spectacle, nothing else.

If you are in Spain this day, go to a pastry shop and buy a portion or the full kings cake – normally to eat after dinner. The kings cake is called “roscón de reyes” and it exists 2 kinds, the traditional one and the filling ones. The cake is a mix of flour, baking powder, sugar, butter, water blossom, eggs, grated citrus fruits, almond and candied fruits.

It has a round form which includes a little figurine. It says that the person who has it inside his portion, he/she will have luck during all the year because the 3 kings will grant their protection and in return, she/he will have to pay the cake.

The traditional one has a little bitter taste so if you are like me and you don’t like it, you can buy it filling with chocolate, cream, jam…