Bernat (1119), Guillem de Torrelles (1265) and Bernat de Sarrià (1329). Due to negligence, the castle deteriorated during the years near to 1460 to be converted to the Farrell tower which was a watchtower. During the spanish succession war, the lord Peterborough, Charles Mordaunt, conquered it in 1705 and Felipe V has been able to recuperate it on april 25, 1706 to lost it again on may 12, 1706 and in 1714, he took it back. 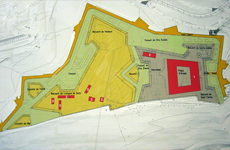 In 1751, the fortification of 1640 has been destroyed which allowed to create cistern systems like a drinkable water. Between 1779 and 1799, more works have been done like the creation of a kitchen which allowed to feed 3000 people and artillery spaces with a capacity of 120 fire slots. It was in this period that the castle took completely the form that we can see nowadays.

In 1808, it has been conquered by the Napoleon army without fighting since the spanish army received an order from the king to welcome benevolently the french army. Some parts of the castle have been destroyed during the bombing of 1842 to eradicate a revolutionary uprising but the most damages were done in 1843. In this year, the castle has been bombarded during 81 days by a total of 2500 bombs.

From 1890 until 1960, the building has been used as a prison and execution place to lock up not only anarchist workers but also some important people like the president of the Catalan government who was executed by firing squad in 1940.

Years after, the place has been given to the city under the management of the Army who did some works to convert it in a military museum and on june 24, 1963, it was inaugurated by the dictator Francisco Franco.

On april 27, 2007, it has been ceded to the city hall and later, declared as municipal equipment and, finally, property of all citizens of Barcelona. Actually, the castle is in renovation and when it will be finished, it will turn into an opened fortress surrounded with gardens and different thematic spaces like an education, a relation, an entertainment and a culture space divided in 3 important structures:

Except those 3 big structures, there are 2 more things to take in account: 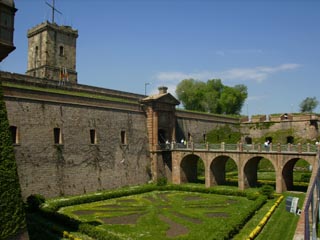 Actually, there is a permanent exposition called "Barcelona té castell" (Barcelona has a castle) located at the bastion of Santa Amàlia which will explain you the new infrastructure and the past of the castle. It is opened only the saturday from 10h – 14h and 16h – 19h and sunday / holiday from 10h – 15h (free entrance).

One time a year, there is the “mecal air” (montjuïc cinema). It is an activity which lasts the full month of july where anyone can enjoy watching a movie in its original version in outdoor, it takes place at the archery field.

To go there, you can either:

I will also suggest to read Montjuïc mountain and Montjuïc cemetery if not yet done.