“call” and where people could see the whole medieval city of Barcelona, the first documents which talked about its existence dates from 1091 but during the excavation starting in 1898, archaeologists found out that this field was only a part of a necropolis. 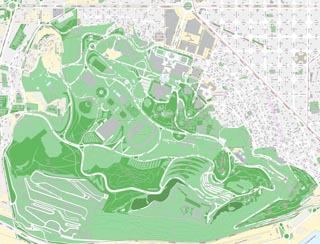 Between 1945 and 2001, more than 700 tombs have been discovered and with the found objects, they have been able to determine its existence between the 9th and 14th centuries. The site represents the biggest and the most significant jewish culture and community during the medieval period in Catalonia.

The funniest part is that, because of the bombing of 1842, an old settlement has been also discovered which dates of the 2nd and 3rd centuries BC. In fact, the mountain is a good strategic place to defend the city and since old time, there was always a fortress on its top.

Actually, the remains of the castle, you can visit, has been built in 1751 by the architect Juan Martín Cermeño and the bombing has destroyed its 460 buildings. It was also used during the Franco dictacture like a prison and a place to execute people by firing squad as Lluís Companys, president of the Catalonia government in 1940 and after, corpses are buried in a cemetery located at the south west side.

Due to the International Exhibition of 1929, some areas of the mountain have been urbanized like the alley which takes us from plaza espanya to the national art museum where you can enjoy a great view. In 2007, the catalan government declared Montjuïc as cultural good of national interest because of the jewish medieval cemetery.

The mountain has welcomed a lot of activities like the Formula 1 (1969, 1971, 1973, 975) and the Olympic game (1992) and nowadays, you can pass easily all the day visiting the different museums or just walking in its different gardens. Some museums:

And some other places:

You can also visit the “poble espanyol” area where it gathers streets, squares and typical places of Spain like Avila towers or the andalusia courtyard with its restaurants, bars, and entertainment sites. During the year, there are a lot of exhibition organized for different national and international events like the international trade fair, automobile exhibition...

To go to Montjuïc, you can walk if you feel athletic because it's not very close from catalunya square, if not take the public transport:

You can also access to the mountain from the harbour of Barcelona by taking the shuttle located at passeig de joan de borbo 22. I will also suggest to read Montjuïc castle and Montjuïc cemetery if not done yet.