The monuments at Barcelona

Fortunately for me, everywhere I went, I have a friend or a family but not everybody has this chance. Ok so what you can do and visit at Barcelona !!! The first thing to go is in the downtown, the Plaza Catalunya. For some people, it is not here but it is in Sants or Plaza España but not for me.

Why ??? Because Sants is a neighborhood, Plaza España is a place which exists in each town in Spain and Plaza Catalunya is the place which represents the capital of Catalunya autonomous region.

From here, if you wish, you can go to the tourist information office to take a map and to buy a ticket for the touristic bus. You will have the choice between 2 companies, one is a service from the government (Bus Turistic) and the other from a private company (Barcelona Tours). Both will drive you to the most important monuments and the price is around 21€ per person and it is valid for 1 day so you can get in and off many times you want. With the Bus Turistic you will have the option to do it at night (only friday, saturday and sunday) and the price is 16€.

For me, it is not worth at all, I took it one time and I did all the trajectories (the blue, red and green way). You will see things but not so much, it is like going for a nice drive and useful for people who don’t like to walk or can’t walk a lot !!! The other choice it is to take the local bus, the metro, the taxi and depending on the area the tramway. By taking the public transport or the taxi, you will have to know where to go and where to get off. To take the taxi, you have the choice to go to the taxi area or just stay where you are and when you see a taxi with a green light, just raise your hand !!! It is not too expensive for example from the airport to the downtown, it will cost you between 25€ and 30€ (luggage including) and for the public transport, I invite you to check the TMB website.

Let’s back to the Plaza Catalunya. It is a big round place where you can buy rice to give to the birds and asking your friends to take a picture of you surrounding by them. It is a nice place with its fountains and at night, they are lighted. From here, you have the choice to:

Go down La Rambla until the port. La Rambla street is famous for its human statues and all along, you will find the animal area (some stands have been replaced by souvenirs ones because of a catalan law from 2004 prohibits the exhibition of animals which are in sale), the flower area and the artist area. You can stop first to visit the Contemporary Art Museum and the Contemporary Culture Center, both buildings are in the same place. The 2nd stop will be the famous market La Boqueria where you can buy fruits, foods, wine and/or lunch. The 3rd stop will be the museum Maritime. The 4th stop at the Cristobal Colon place where you can take picture of its statue pointing to America and you can go up to have an overview on the surrounding. The last stop will be the Maremagnum (moll d'espanya del port vell 5) where you can visit the Barcelona Aquarium and/or go to the IMAX (a big theater to watch documentary movies in 3D) - BE AWARE, La Rambla is full of THIEVES who will not hesitate to rob your purse !!!

Go down Avinguda del Portal del Angel until the Parque de la Ciudad. The 1st stop will be the Catedral Santa Eulalia and Plaza de San Jaime. You can go inside the cathedral and take a lift which will bring you to the roof. The 2nd stop will be the museum Picasso, next Palacio de la Música Catalana and to end Parque de la Ciudad where you can go to the Barcelona Zoo and take nice pictures to the impressive fountain called Cascada el Carro de l’Aurora built by Josep Fontserè and Rossend Nobas and the famous stonework mammoth !!! You can also rent a little boat and take your girlfriend or boyfriend for a romantic ride on the little pool.

Go up Passeig de Gracia until Parque Güell. 1st stop should be 2 buildings from the architect Antoni Gaudi - Casa Batlló and Casa Milà (also named La Pedrera). If by chance, your vacation is between august 15 and 21, you have to stop at the Gracia neighborhood, during this period, it is the traditional national party where majority of the streets are decorated and you will have a lot of fun (more during night). The 2nd stop will be Casa Vicens, the first building of Antoni Gaudi classified like World Heritage Sites by UNESCO. To go to Parque Güell the best is to take a taxi because you have to go up with a slope of almost 70 degrees !!! If you are not scare to walk, it will be more cheaper. The park is very impressive with its snake place, the wave tunnel, the dragon, the Hipóstila room (also named room of the 100 columns), an overview over the city and much more, to not miss !!! 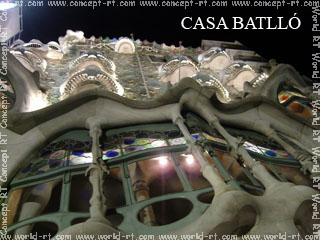 Back to Plaza Catalunya, I will now describe the monuments worth to visit by using a compass. Of course following where you are, better to take a taxi or a public transport if it is far away and/or if you are tied if not walk, don’t be lazy !!!

In the East side, Sagrada Familia, Santa Creu i Santa Pau Hospital, Plaza de Toros Monumental, Agbar Tower and the Forum. The impressive basilica Sagrada Familia of Antoni Gaudi started in 1882 and still under construction. Inside, you will see something very beautiful and if you don’t suffer vertigo, you can go up to the towers by using the stairs or by lift. Near to it, there is the Bull Place Monumental where you can visit the taurine museum and the hospital not because of your feet but for its particular structure. To the Diagonal street, the Agbar Tower to watch during night time for its light show. Down to this street, you will find the Forum where was celebrated in 2004 the Universal Forum of the Culture and it is best to take the metro (line 4 station El Maresme-Forum) or the taxi. 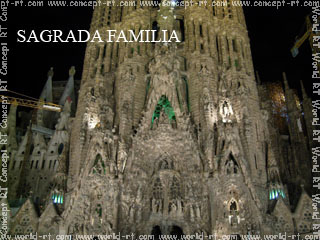 In the South side, the beach. After a long walking day, take a rest to the beach. I will say that I don’t like much the beach at Barcelona because it is dirty and normally I take the car of my girlfriend and go to its outskirts like Sitges, Castelldefels, Masnou… You can go there also by train if you don’t rent a car.

In the West side, up to the Diagonal street, the garden of the Pedralbes and the Camp Nou for soccer fan. By Gran Via Corts Catalanes street, Plaza España where there are a lot of exhibitions and in friday and saturday nights, there is a water and light show called Magic Fountains (from 19h to 22h - you can watch an extract below but depending of your connection, be patient), the national museum of Art and the Olympic Games site. Near to the Olympic you can visit the botanical garden and the Palau Sant Jordi. You can also visit Palacio Güell located at the Carrer Nou de la Rambla street close to the port. To finish, Montjuic where you will discover an ancient fortress used to keep watch who entered at the city by sea.

Extract of the Magic Fountains show

In the North side, you can go to the park of the Horta labyrinth, the CosmoCaixa (national museum of science) and Tibidado. The park is built like a labyrinth and it is located in the Horta district. Tibidabo is situated to the mountain so you will have to take a taxi (if you don’t care to spend a lot of money) or take the public transport – bus T2 Tibibus from Plaza Catalunya or the metro line 7 FGC until the final station Av. Tibidabo, after take the Tramvía Blau tramway and the funicular Tibidabo. If you have kids, it is the good place for them since there are a teenager theme park and for you, an impressive overview to Barcelona. 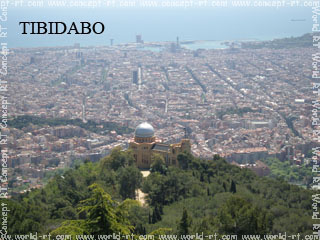 And if you get tired and you wish to have fun, you can go the adult amusement park Port Aventura. This park is divided by 3 main themes - PortAventura Golf, PortAventura Park and Caribe Aquatic Park. To go there, you can go by car or by the train RENFE direction Port Aventura – the ticket will cost you per person between 20€ and 25€ (prices for economic class).