For example, it took me more or less 3h30 by car and I did it quickly and skipping some enclosures because I entered inside around 16h30 and the site closes at 20h during summer time. So I will say that at least 5h minimum is necessary. 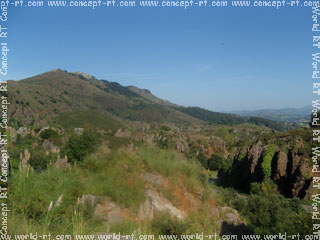 Like any places open to the sky, it is always best to go during a sunny day because you will enjoy more than a rainy day, be able to take great pictures, get out of the car to walk in one of the tracks in the mountains and much more advantages of a beautiful day.

There are different entrances and I entered in the east section after paying 18 euros. For this price, except the right to get in, I got a map and a discount to lunch at its cafeteria – very useful if I was there before noon. 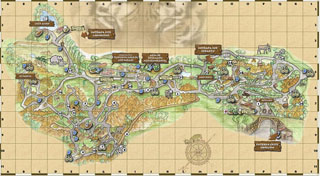 Just near the entrance, the first animals that I could see were elephants but they were a little far away from my position and if I wanted to see them better, I had to go round the enclosure crossing other animals so I decided to skip it.

Because of the limited time, I had to plan carefully which animals I wanted to see or which section I wanted to go first and after, if I got time, go to see the others. Well, it was not so easy because using my car, I had to follow the green track. Of course I could skip it but some roads are cut off or only one way so to go from a section to another one, sometimes I had to go back to a visited one before.

Getting out around 19h50, I skipped some animals like wolves, monkeys… and to be so close to giraffes, ostriches… that I could touch them. Animals more dangerous like lions, jaguars… are enclosed inside a wide ravine that I could only see them from above and no way that they can jump on the visitors because of the height.

The best is to pass the full day in the park. By this way, you can watch some animal shows like eagle and seal ones, do trek and/or botanic tracks and visited places only accessible by foot, participate at a multi adventure activity (climbing, canoes, archery and zip line) and much more.

You also have the possibility to do the guided tour by bus which will drive you to the most interesting enclosure and explanation of each place. Even you have the choice to do it by quad bike.

The multi adventure, the quad bike and the guided tour have an additional cost - consult, at the entrance, the schedule and prices because according to your arriving time, you will be able to do it or not.