The palace was for the Peru viceroy, Manuel Amat i Junyent, marquis of Castellbell who died before to be able to enjoy it and after his death, the place was the residence of his widow and received the name of “Palace of the Viceroy's wife” (also known as Virreina Palace). 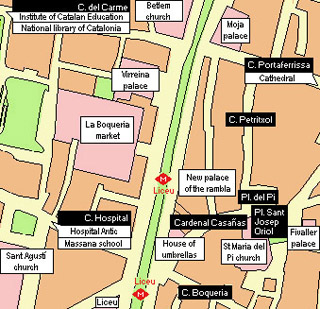 Beside it, there is an old music shop “Beethoven” where you can find a lot of partitions from old to new ones. Going down the rambla, you will discover the famous market of Barcelona “La Boqueria” although its official name is Sant Josep market. Inside, you can find everything (well almost but a lot of things) and some places to lunch. This market has been able to keep its tradition during those past decades and it is worth to visit it.

Back to the portaferrissa street, take a walk in the petritxol street where there are book and fashion shops, exhibition rooms like “Sala Parés”, goldsmiths and bars specialised in traditional hot chocolate drinks. The street was opened in 1465 where majority of the houses, built during 17th and 18th centuries, were owned by a guy named Petritxol and where the famous catalan writer Àngel Guimerà (1846 – 1924) lived in the house number 4.

On the other side of the street, number 94, you will find a building of high technology called “palau nou de la rambla” (new palace of the rambla) (1992) in which it has been installed a robotized parking of 11 underground levels by the architects Martorell, Bohigas, Mackay, Puigdomènech and Jordi Frontons. Its structure allows to see the belfry of the church of Santa Maria del Pi across a great opening on its facade.

After this building, if you take a careful look, you will see a green chinese dragon sculpture hanged on the wall of an oriental styled building named “casa dels paraigües” (house of umbrellas).

Next, the “rambla dels caputxins” (rambla of capuchins).