the escudellers street where, through the time, it was the street for potters in the Middle Ages, for hoteliers in the 18th century and the gathering of progressive french people in the middle of the 19th century. Actually it is full of restaurants, pubs and bars and at the end of the street, you will find the square dedicated to George Orwell where a surrealistic monument has been built by Leandre Cristòfol (1991). 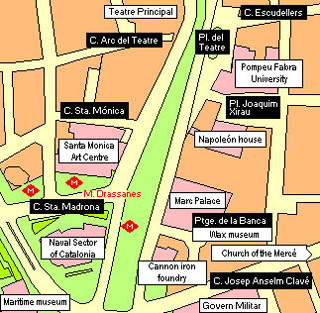 Beside the theatre square, there is the Pompeu Fabra University and behind it, the square dedicated to the philosopher Joaquim Xirau. This part of the rambla still conserves some former building like:

Let’s back to the theatre square by going down on the right side of the rambla, you will find first the Teatre Principal. In 1568, Felipe II allowed the “Hospital de la Santa Creu” (Hospital of the Holy Cross) to build a theatre in Barcelona to maintain itself from its takings. In 1603, after ceding the land, a wooden theatre has been built and later, substituted by a more permanent construction which burnt in 1787.

Totally rebuilt, it welcomed for the first time in the country the italian opera and the theatre has been named as “Corral de Comèdies” (courtyard of plays), later as “Cases de l'Òpera” (opera houses) and after as “Teatre de la Santa Creu” (theatre of the Holy Cross). In 1847, it received an important renovation on which the front has a curled and tripartite form and adorned by 4 busts of past actors and actresses and renamed as Teatre Principal but its destiny made it suffer 2 more fire, one in 1924 and one in 1933.

Still going down, you will find the former convent of “Agustins Descalços” (barefoot Augustinian) (1626) converted actually in the Santa Monica Art Center, an art room of the Generalitat. Next to it, there is the church of Santa Mònica which conserves a worthy baroque cloister of imposing austerity.

Once at the end of the rambla, you have the “Drassanes” (old shipyards) which are the bigger and most important gothic civil buildings of the city. Built during the 13th and 14th century, they have been declared as public place after 1939 and actually some are:

Also during the weekend, there are stands which sell handmade objects like jewelry, hat, candles...