If you want a list of all museums, check this topic Museums at Barcelona. If you are looking for something to do at night time until very soon in the morning, from 3 until 9 of august, there is the Barcelona Summer Week 2009 in which the slogan is “7 days, 30 clubs, 7 beaches, 250 events and more than 100 deejays”. This is one of the big events where DJs as David Guetta, Bob Sinclair, Armin Van Buren, Tiesto… will perform. The price is starting from 59€ and if you want to know in which club, beach… they will be, check its official website. 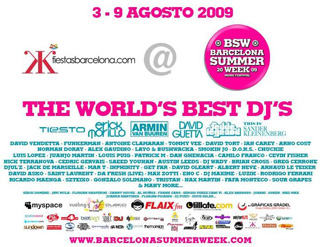 You prefer something more relaxing, don’t worry, there are free live jazz concerts organized in the Ciutadella park. Each wednesday at 22h until august 28, this kind of event started since july 8 and if you plan to go with your girlfriend, I recommend you to do a picnic with candles meanwhile listening the band.

What more !!! Not enough with all those things I just told you because you won’t go back at work before september !!! Lucky you are, yes there are more. What about watching a movie in outdoor meanwhile enjoying some free sushi !!!

This activity is called Mecal Air and it takes place every friday between 20h and 24h for 5€ (2€ with flyer). It is a mix of short movies, music and sushi and if you want to enjoy it, you have to go to Montjuic, exactly at “plaça del Baluard del Poble Espanyol” but take note that free sushi is available only between 20h and 21h after, you will have to pay.

What about watching classic movies on a boat while breathing sea air ??? Cinemar is organized by the company “Las Golondrinas” (portal de la pau, in front of Columbus statue). Every friday and saturday until august 29 at 22h for 28€ (drink included), the boat will make a coastal tour so if you get bored of the movie, you still can enjoy a nice night tour and you will be back at the harbour around 23h30. Take note that during day time, there is also this sea tour but without movie from 10h to 19h.

You have kids, don’t worry. There are a lot of things for them to have fun like:

And I will end with the local and traditional festival of some districts of Barcelona. The first one starts 12 until 16 of august and it is called Sant Roc festival (Sant Roc district). The most famous one is the Gracia festival (Gracia district) from 15 to 20 of august where some streets are decorated (in this topic Traditional celebrations at Barcelona, you can see some pictures) and you have to go absolutely. Sants festival (plaza de la farga) from 19 to 30 of august, it is the same thing as the Gracia festival but at Sants district and it is more focused for children.

So that’s all I can tell you about Barcelona during the month of august, now it is up to you to enjoy at maximum your holidays !!!