with the show “Edipo, king of Sofocles” and from then, any kinds of spectacles were organized like opera, dance, music, theatre, folk... In 1969 to 1972, it was closed and in 1976, the city council organized the first Greek festival which would be repeated every year except in 1979. 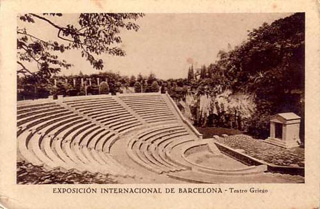 Beside the theatre, there is a pavilion that was destined to musical concerts and now it is a restaurant. Majority of the shows are organized during summer time, normally between the last week of july and the first week of august and unfortunately, during winter time, there are nothing because it is an enclosure outdoors.