Santa Teresa of Carmelites has been destroyed by the fire in 1936. Walking above a footbridge, you will see 70 tombs dating between the 2nd and 3rd centuries A.C. and how the romans built their graveyards outside the city walls.

4 wall entrances of Barcino. The defense towers and the wall date from 1st century B.C. and 4th A.C. but during the 12th century, the towers have been renovated. The 3 other entrances are located at: 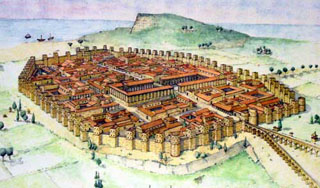 Taking a look on the left tower, enclosed to the Ardiaca house, you will see the roman aqueduct from where the water was coming. In front, you will find a visual poem from Joan Brossa spelling the word Barcino.

Now by looking towards the opposite side of the square, you will discover the CAB building (Col legi d’Arquitectes de Barcelona - Architect Association of Barcelona) but surely your eyes will be attracted by the 3 friezes made by blasting sand by Carl Nesjar and designed by Pablo Picasso:

By taking one of the main ways used by the roman colony to get out/in of the city called “decumanus maximus” (nowadays called bisbe street), you will head to the Ardiaca house (santa llúcia 1), just at 2 minutes by walk from the square. It was the residence of the ecclesiastical hierarchy since the 12th century and it has been united with the Decano house in the beginning of the 16th century fusing, by this way, the renaissance structure with the gothic original building. If you go to the back of the house, you will discover that the wall is part of the ancient roman wall of Barcino and that it is enclosed to a section of the roman aqueduct replica which drove to the gateway of the city.

Near to this street number, try to spot a millstone and you will discover the highest point of the roman city called the Táber mount.

Walking to the beginning of the paradís street, you will cross the road called “ardiaca” (actually named baixada de la llibreteria street) where the roman forum could be found (now called sant jaume square). It was a meeting place and for politic discussion, actually, it is on this square that the City Hall of Barcelona and the Palace of the Catalan Government are located.

Near to it, the Morell house (c/ fruita 2) is a building dating from 1851 but in 1999, a domus, dating from the 4th century, has been discovered during its renovation where people can see some ruins of the roman house but also ruins of “tabernae” (commercial building).

Walking back until the rei square, you will discover the Padellàs house, now the head office of the History Museum of Barcelona, where it has been unburied in 1931 ruins of some artisan and agricultural factories as salted fish, fabric and wine, a very interesting archaeological collection of the ancient roman colony of Barcino.

In the origin, the city had a perimeter of 1.350 meters surrounded by a wall of 76 towers of 16 meters high to defend itself against the enemies.

Going down all along the former wall, you will arrive at the section of the sots-tinent navarro street. This section is very interesting because during its renovation in 1950 and the complexity of the work to keep the former part and to distinguish it from the new one, recycled materials were used so by taking a close look, you will see some pieces of sculptures, pedestals and stone tablets from 1st to 3rd centuries.

And you will end this itinerary at the sea door (c/ regomir 3). It was the main entrance of Barcino which leaded to the sea, a very important point for the trade and the transport of goods. To complete the theme, you can go to visit the History Museum of Barcelona (plaza pau vila 3, bxs) where you will see some roman works and/or check this archeological map to see where there are the ruins.