International festival of canoe at Ribasella

full and young people who came with their tent didn’t hesitate to camp out on every green portion that the village could offer.

In one day, I was able to visit it and to tell you the truth, if you don’t come for the festival, it is not very pleasant to walk on its streets full of trashes (particularly in the downtown).

At its harbour, a very mini theme park has been put with some stands where you can buy jewelleries, clothes, food, souvenirs… and curiously, police didn’t chase people who were selling illegal dvd !!! but didn’t hesitate to call the tow truck for cars which were not well parked. - luckily for me, I parked in a free parking, it cost me a little to find a free place.

Walking to the beach, more stands selling hand made jewelleries and when I arrived to my destination, the beach is quite small. On the left side, I saw a kind of square where some people were walking to go there and on the right side, a stair to go up to the mountain.

Like you can imagine, it was crowded and also very dirty since some people left their trashes, including some persons have been able to bring one of the bins on the beach !!! During high tide, half of the beach is covered by the sea and unfortunately the bin was on this part. In spite that police saw it, I don’t know if they did something or not but the fact was that the bin was floating on the sea with all its trashes.

In this part of the area, the weather is not very hot, it is more common the rain than the sun even during summer and the water is very cold so if you don’t fear it, you won’t have any problem to swim. Many people were swimming, in fact it is a question to get used or not since people who live in this part don’t have a lot of choice.

After stopping to a place to eat something, I decided to go first on the square. The place offers a great view to the horizon and also to the village and its beach. After staying some minutes to enjoy the breeze and to take pictures, I decided to walk to the opposite side, up to the mountain.

To go there, I walked all along the beach but I found out soon that there is no direct way and I had to cross back the downtown. When up to the mountain, the sunlight was starting to fade and it started to rain. Fortunately not very strong so I was able to take great pictures before to go down. 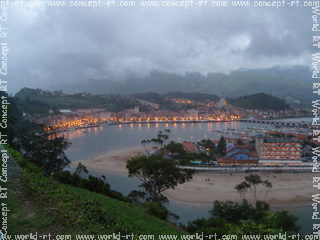 When back to the downtown, the weather was getting worst and it was already night time around 21h. I got wet not too much but enough to decide to go to my car to take an umbrella. Some people were trying to find a place where they could eat without to be wetted meanwhile I was looking a bar to dine.

Not only this village but this area is well known for its cider products from the drink to the kitchen. You can buy cider drink, cider candy… and to eat, food cooks with cider.

Of course, because of the rain, the festivity was spoiled and I don’t think that it welcomed the expected visitors but it didn’t prevent some people to dance to the rhythm of the music under the rain. When I entered in a shop to buy some jams in the afternoon, the owner told me that the village expected around 300.000 visitors today and that tonight, the entrance of the village would be closed by the police.

After dinner, I decided to go to rest since the rain didn’t stop and streets are almost empty but more because the next day I had to go to another village called Argüeso at its castle for its first international festival of falconry.