Since bulls start to run at the beginning of the “santo domingo” street, the bravest people wait for them and start to run when they see them coming until to reach the bull place – more and less they have to run 825 meters and maximum 3 minutes. Like you can guess, the goal is always to run in front of them and to try not to be caught by a bull. The less brave ones will run behind the bulls but don’t think that is less dangerous since at any moment, the bull can turn over and run after someone.

If you don’t want to participate, just go there to watch, have a lot of fun and enjoy the party with good wines and foods. The day 6 you have to be in the main place of the town hall at 12h to see the launch of fireworks announcing the beginning of San Fermin and by saying “"Pamplonesas, Pamploneses, ¡Viva San Fermín!. Iruindarrak, Gora San Fermín!".

So crowded that in some parts, you may not been able to walk and the day is so hot, particularly in the afternoon, that you may scream “water, water, water” to the person on the balcony and with the others, be ready to be refreshed.

This tradition dates back to the Middle Ages; it was mainly a commercial fair and secular party and celebrated the day september, 24th but, because of the bad weather during this period, this date has been changed in 1591 to july, 7th coinciding with other religious parties.

It was a place to meet people and to exchange products but also a good way to make party and to organize competitions. It wasn’t before the end of the 16th century that appeared the first bull running.

Around 1950, this tradition lost a lot of its religious components and nowadays, visitors can still see some interesting processions and other events like the “jota” or “agur jaunak” song.

During this party period, finding a free room at last minutes it is very hard, almost impossible; it doesn’t matter if you are looking a place either at a hotel or at a particular. Like you can guess, a special price is applied and most of the hotels/particulars won’t hesitate to ask you a high price even if you plan it one year before.

The most expensive ones are located in the main streets of the “encierro” (bull race), particularly if the room allows you to see it. And if you don’t have the chance or you don’t want to spend an exorbitant price, some citizen rent their terrace to allow you to have a privilege view on the race but still expensive and some with catering service.

The race is located at the old section of the town where 6 bulls are launched at the slope of “santo domingo” street and will have to go up with 8 halters, shepherds and runners until “consistorial” square (town hall square), take the “mercaderes” street to access to “estafeta” street which conducts to the fence area of Telefónica until the bull place - normally runners are dressed in white and shepherds, green dress with a green armband.

Anyone can be a runner and if you want to be one of them, you need to be in good form because if the bull catches you, you may be trampled and/or wounded by horns and end your holiday in hospital or worse. Except to be in good condition, you have to respect those following rules:

If you just want to be a spectator, stay behind the protective wooden fence installed all along the streets or take a seat on the bull place after paying a little entrance price. Once at the bull place, you can watch a little spectacle on which some bold runners will play with bulls by jumping above them, dodging them at last minute… 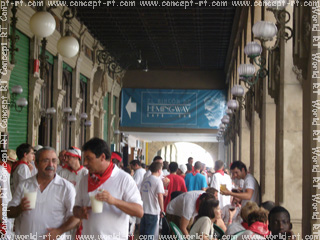 After the racing bull, you still have a long and entertainment day to enjoy and the other places to go are “jarauta”, “caldereria”, “san nicolas”, “plaza del castillo”, “labrit” and “estafeta” areas. Well, I will say that after the “encierro”, there are few things to do and you may have to wait until around 21h to have fun. Normally, people take a nap after the lunch, especially the ones who woke up early to see the racing bull. Take advantage to visit the town or to walk in the narrow streets of the old quarter because there are less people.

The most important activities are the “visperas” (day 6) and “san fermin” (day 7) processions and the giants of Pamplona parade (each day) – the 8 giants are made of wood, cardboard and fabric and they represent royal couples of the world.

Each day, at 23h, you can watch a fireworks spectacle which lasts between 15 and 25 minutes and launched from the “ciudadela” place. And to end definitively the festivity, the last day july, 14th at 24h you can hear the song called “pobre de mi” (poor me) at the town hall place to close it until next year.

If you are going to ask me if it is worth or not, I will say depending of what you are looking for.

The racing bull lasts 3 minutes and it happens only 1 time a day and at 8h in the morning so it will be very fast. Majority of the day, you will dedicate your time to drink and to eat until your body and your mind can’t stand anymore. The day starts with clean streets to end at night time, very but very dirty.

If you are looking to have fun drinking, dancing, eating… 24h non stop, absoluptly you should do it. If you are looking to make tourism, do it before or after because it will be not worth to pay higher prices (hotel, food, drink...) applied during this period – if it is your first time, I suggest you to come before and stay for the 2 first days or to come starting from the last day of San Fermin.

Advices, be careful of your purse and your things because there are a lot of pickpockets and if you want a great view, I recommend you to go to “san jose” square to take a fantastic sunset pictures.