Logroño and the architecture of Frank Gehry

The most harder was to find the village not the hotel because once there, the hotel couldn’t be missed because there is only one and with the GPS, it was easier and we arrived around 13h30.

The hotel is really a great place, an old renaissance palace of the 16th century, not only for its surrounding but also for its stylish decoration with gardens and mini pool and the good and friendly treatment of the employees. A lovely living room with a nicely terrace to enjoy the wonderful landscapes and to watch the stars during the night meanwhile enjoying a cocktail. If you plan to go there, the hotel is at left, just at the entrance of the village, next to the church.

The bad point is that the only restaurant is the hotel one and it was closed so we decided to drive to Logroño to lunch, 1h of driving more or less. We didn’t go to Estella, the closer town, just at 20 minutes, because we scheduled some guided visits the next day.

Known in the past as Varea or Varaia, this small village was used as a strategic point during the roman period as a harbor because of the Ebro river. From the medieval period, due to the St James’s way (camino de Santiago), the village grew up very fast which transformed it to the town known nowadays as Logroño.

After the lunch, we went to visit the downtown like the market and the city hall square with its Espolon shell and monuments like Saint Marie of Redonda co-cathedral (concatedral de Santa María de la Redonda) where a copy of the Crucifixion, work of Michelangelo, can be seen, only after putting 50 cents to light it because the painting is behind an armored window and in the dark.

Around 19h, we left the town to go to the village Elciego located in the Autonomous Regions of Basque Country, famous for the architecture of the Marqués de Riscal hotel, work of Frank Gehry (Guggenheim in Bilbao, Spain; Walt Disney Concert Hall in Los Angeles, USA; Dancing House in Prague, Czech Republic…).

Fortunately for us, the village was celebrating its Virgin of the Square festival (fiestas de la Virgen de la Plaza) so the village was very animated during this night but before to entertain us and to eat something, we tried to take pictures of the building under different perspectives.

It is the typical local party that you may experiment in a village with many competitions, traditional dances, concerts, free food degustation each day… until the end of the festival which lasts normally one week. 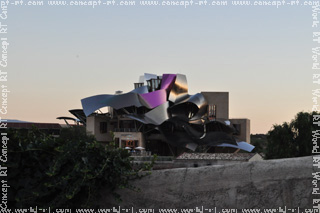 One of the best things was the wine, a glass of wine costs cheaper than a coffee in Barcelona !!! But unfortunately, I had to drive so no way to abuse it. To close the night, a bull man of fire was coming to the main square and everyone tried to escape but in same time to be near to him. The bad thing is that if you get caught by his fire, a kind of device throwing fireworks, your clothes can end in the trash because of the many holes done by sparks.

Time to go back to our hotel and be ready for tomorrow because we had 2 guided visits waiting us at Estella.