take some pictures because of the big waves crushing between them and hopefully for that, we were able to see the folklore festival. This event seems to take place the first weekend of april and we saw a lot of traditional costumes, traditional dances and listening traditional music.

Around 15h, time to go back on the road, again paying some tolls since I used the highway to reach quicker Oporto around 17h30 and once in the town, it was a little difficult to find our hotel Pão de Açucar (no parking), located at “almada” street, a very small street and very difficult to park around this area. For 85 euros a night, we had a little room with double bed and breakfast included.

The hotel is normal, not bad not good but the good point is that it is located in the historic center which is declared as World Heritage Site by UNESCO and very close to the city hall, the cathedral, the Dom Luis Iron Bridge, the wine cellar area and the nightlife area. Next time, I may consider reserving a room at Residencial Vera Cruz (rua ramalho ortigão) because from our room, I saw that this hotel has a great restaurant terrace.

First we visited the city hall area situated at “aliados” square and by walking down to reach the Douro river, we made a stop to the cathedral located in the old part where we discovered buildings dating from 15th century and good luck, we spotted a great place to have a great view on the bridge but unfortunately, it was raining. 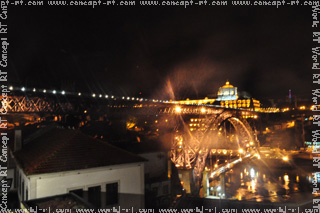 Taking the bridge to cross the river, we arrived to the wine cellar area located at Vila Nova de Gaia but no one on the street because of the rain so we did a quick tour before to go back to the square where we found a restaurant with live music until midnight (Guarany, avenida dos aliados 89).

After filling our stomach, we thought to go back to the hotel but, luckily, it stopped to rain and we saw a lot of people walking on the street so we decided just to follow them since they were going to the hotel direction. With their help, we found out the nightlife area and entered to one of the clubs (Lusitano; rua de josé falcão 137).

The entrance is free but the doorkeeper gave us a little paper with 2 little sentences, one saying that 5 euros of consummation is obligatory before leaving and the second says that if the owner losses the paper, he/she has to pay a penalty of 75 euros !!!

Ordering a vodka coca cola costs 5 euros so it was very simple to fulfill the first condition and to prove it, the waiter wrote on my paper what I consumed. The place plays good music, a dance pop style and after dancing about 2h we left the club but not before to give back to the doorkeeper the paper with the proof that we spent at least 5 euros.

More people on the street, more clubs to enter and it was what we did, we entered to another one very crowded which is free entrance and no paper so no needs to order but we left quickly to go to sleep because we were very tied.

Waking up around 10h, the day was very sunny so after checking out the hotel, we went to the wine cellar area to visit the Ferreira cellar (avenida ramos pinto 70), one of the most famous and still Portuguese. For 4 euros, we had a guided tour. The guy explained us who was Ferreira, a little history about the family and the founder, where and how the wine is produced, the different categories… through the different parts of the cellar and at the end of the tour, we tested 2 types of wine, one white and one red (included in the price).

The oporto wine is famous to be sweet and the white wine is sweeter than the red one. After the tasting, we went to the shop part to buy some bottles, generally the price is between 15 and 20 euros.

Before to take the road back to Barcelona, we walked a little along the river and we went to eat in a restaurant specialized in salted codfish (Bacalhoeiro, avenida de diogo leite 74), very good and cheap. To get out of the city, there are a lot of options and we chose to drive along the river until it disgorges to the North Atlantic Ocean and up the coast until the “cidade do salvador” square and from there, we took the “estrada da circunvalação” street until the next indication showing the exit of the city to Spain.

The drive all along the coast was great because it was a beautiful and sunny day and a lot of portuguese were outside to enjoy the weather but sadly for us, time to go back at home after been 2 days in Oporto and spending 4 days for our journey of Portugal starting from the south visiting Lisbon and Sintra. For more pictures, check my photo website Concept RT.