South of Portugal, Lisbon and Sintra

We paid 110€ a night for the Miguel Suite which includes breakfast and a welcome bottle of red wine. Unfortunately for us, the weather was not so warm so we didn’t enjoy the swimming pool and the barbecue facilities. The first visit was Lisbon, capital of Portugal. To go there, we took the train instead of the car, just to avoid the traffic jam inside the city. Near the hotel, there are 2 train stations so we drove to Mira Sintra-Meleças station instead to Rio de Mouro station and parked the car at the free parking.

Mistake because the last train to come back from Rossio station is at 22h31 and like you can guess, we passed more time in the downtown so we took the train of 0h01 to Rio de Mouro station, took a taxi to the parking of Mira Sintra-Meleças station and finally drove the car to the hotel. The main inconvenient of the train is that we are enslaved of its time schedule ;-(

Taking off at Rossio station, we were directly in the downtown at “restauradores” square. It is very big but not impressive, missing some charm and a feeling of impersonal. Next to it, there is a nicer square called “Pedro IV” with its fountains and a lot of people sitting on the ground talking and drinking.

Portugal has great reputation about paella and it offers more choices than Spain so near to the square, we entered to a bar situated on the corner of the “primeiro de dezembro” street to lunch the traditional octopus paella and pig ear salad, very good and big plate for cheap price. 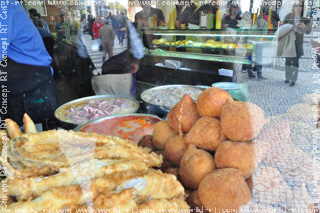 Instead to go up until the Eduardo VII park, we went down to “comércio” square close to the Tagus river by taking secondary streets so we were able to spot the famous Santa Justa Lift (known also as Carmo Lift) located at “santa justa” street crossing “carmo” street. Huge line but very huge line so we decided to skip it.

“Carmo” is a commercial street which is very pleasant to walk. Full of shops and bars, we entered in some shops but we bought nothing since the prices are very similar to Spain, generally something like 1 or 2 euros lower or higher and also because there was nothing we liked.

Few minutes later, we arrived to the Tagus river. Near to the square, there is the ferry station where people can take a boat to go to Almada or to do a sea tour for example. Meanwhile walking to the Alto district, we stopped at the Santa Caterina square to have a great view over the river and the sunset. Playing adventurers, we took some little streets to get lost a little before to be back to some big squares like “säo luís” and “flores” square where, around, there are a lot of places to dinner and to take a drink (famous for its nightlife).

After dinning at Porco Preto (marcos portugal 5 – the place has good decoration but food is normal and a little expensive), we walked down the “Pedro V” street for a romantic night walk passing the “são pedro de alcântara” street where there is a great view on the “restauradores” square until the tramway which brings people down to the “calçada da glória” street near the Rossio train station.

Once we were back at our hotel, we took a welcome and great warm bath meanwhile savoring the red wine before to have a nice sleep and be ready for the next day to Sintra.

Sintra is very marvelous and I think that if someone plans to go to Portugal, they have to visit first this town absolutely. The town is a UNESCO World Heritage Site because of its 19th century romantic architecture. This time, we decided to take the car because at night time, we planned to go to Cabo da Roca to see the sunset and to dinner at Cascais.

The first issue we met it was the traffic. Indeed before to arrive to the historic center via "heliodoro salgado" avenue, there were a huge line of cars moving at the turtle speed so we decided to park the car around "serração" street and to make the rest of the travel by walking. It took us more or less 27 minutes. Luckily we did this way because we saw and heard a lot of people complaining the difficulty to park their car.

Once there, we decided to visit first the Quinta da Regaleira estate and after the Pena palace or the castle of the Moors using the bus service but we passed so much time visiting the estate that we didn’t have time to do more things. The entrance price costs 6 euros and it is worth it.

The estate is very huge which includes its palace, its chapel and its marvelous park featuring lakes, grottoes, wells, benches, fountains and secret paths designed by the owner António Augusto Carvalho Monteiro and the architect Luigi Manini.

Depending of your interest but for us, we like it a lot that we didn’t see the time passing, entering in the morning around 11h, we left the place around 17h not because we saw everything but because we started to have hungry. Inside the estate, there is a bar selling foods and drinks but we preferred to eat somewhere in the historic center.

Since it is a touristic site, there are a lot of places to eat, we just picked up one to try and food is regular. One advice, if you don’t order something but they put it on your table like bread, olive… say NO (except if you are going to eat it) or they will bill you even if you don’t touch it at all.

Finishing eating, back to the car and on the road to Cabo da Roca for some great views because it is a cape which forms the westernmost point of both mainland Portugal and Europe and after to Cascais, a coastal town for the sunset and to dine in one of the restaurants at "largo luis de camões" street. The town is very famous for its beaches, its seascapes and its natural sights but also its golf courses and the practice of surf and windsurf.

To end our night, we went to the Casino of Estoril, just a few minutes from Cascais and to tell you the truth, we played and we lost, not too much, just 5 euros ;-) That was how we ended our day and our journey to Lisbon and Sintra but not to Portugal, just 2 days (short but intense) and our next stop was Oporto, north of Portugal. For more pictures, check my photo website Concept RT.