From this moment, they decided to give themselves to the Calahorra proconsul declaring their faith. 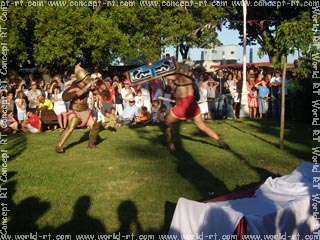 In spite that they were imprisoned and tortured, they never gave up their religion and they were condemned to die beheaded to the shores of the river Arnedo on march 13 300.

The legend says that before dying, Emeterio threw to the air his ring, and Celedonio his scarf which rose up towards the sky in the view of everyone. It also says that their beheaded heads came up to Santander on board of a stone ship that went through the rock known as “Horadada de los Martires” (perforated of the martyrs) and they ran aground on the coast.

The market is very great, majority of the stands are from artists and artisans who sell their own products. You can find from the simple jewellery to a beautiful vase designed as before but also games, paper flowers, candles… and in some stands, you can see how they create them.

Some acts are also organized and some with explanation like the gladiator act, the roman band that makes their round on the streets… and for children, they can ride on donkey, do whirligig tours… and on saturday night, enjoy the firework show.

The market is opened from 11h30-14h30 and 17h30-22h30. Meanwhile it is closed, you can go to eat something in one of the roman bars. I suggest you to try first the roasted ham because it is very delicious and if you don’t like ham, there are other things like pizza, octopus, sausages…

To keep going on with the history, I would like to add that their relics were guarded by the monks of the town, first in a hermitage next to the roman governor palace and later, in an abbey created by Alfonso II, king of Asturias and Leon in the year 791 and actually, they rest in the cathedral constructed above it. 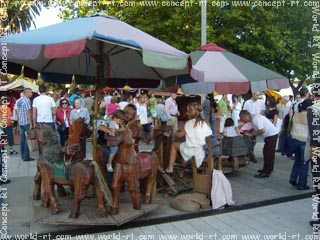 The Saint Martyrs gave the name to the city Santander (Portus Sancti Emeterii - Sant'Emter) of which they are the patron saints. My suggestion is that if you are coming to Cantabria, do this itinerary, visit first the village Laredo for its festival of battle of flowers which occurred each year on the last friday of august until the firework and the next day, to go to Santander for its roman festival, more or less 30 minutes by car and to end, go to the cantabra wars at Los Corrales de Buelna.