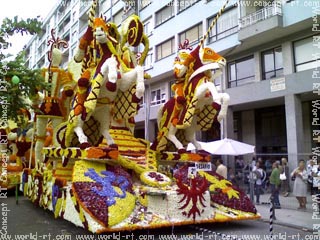 In spite that this event happens only in one day, the preparation and the creation of the artistic carriages start months ago, normally from december until when they have to parade in the street as competitors.

The works of the artist groups are very impressive, not matter if it is small or big size, and each one gets an award given by a group of juries. To participate to the competition, they have to respect some rules:

The creation is totally up to the artist group including the budget, the design, the selected theme, the flower cultivation…. If in the past, people used wood and plaster to build the base of the scene and the competition could count more than 40 participants, nowadays, they use synthetic cork and polystyrene, easier to hand and to create very impressive art works but less participants, more or less 15.

The other 2 important facts are that the first year, it was done on the sea and only during the civil war (1936-1939), it was not celebrated. Why on the sea and after on the earth ???

Well it was a way for the fishermen to express their complaints and the damages caused by the fishing way of the big boats. They organized it during the visit of the king Alfonso XIII in the neighbourhood village called Santoña. Since the strong success of the event which attracted the curiosity of the people, the village council decided to do it the next year on earth but not more as a protest but as a festival.

To stick petals and flowers on those materials, the group can use wooden nails and sticks but usually, they use special glue made of water and flour. The parade starts normally between 17h and 17h30 and it happens around the alameda miramar area. Each carriage is pushed by the artist band dressed according to the selected theme and it has to pass 3 times on the streets marqués de comillas, comandante villar and lópez. The 2 first are to be judged by the juries and the last one, to take the prize.

In the beginning, the prizes were consisting of money and varied objects as glasses, vases, clocks… and now, the budget can reach more than 180.000 euros. Moreover, the festivity was celebrated on sunday until 1964, and from this date, it has changed to friday because of the overflowing spectators during the weekend. 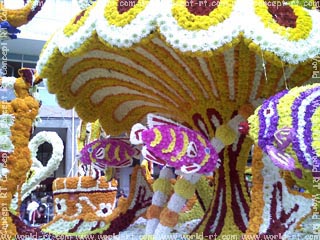 Like other festivity, there are other things organized like a funfair, concerts and firework at night, stands selling products… and if the weather is sunny, you can go to the beach of the village which is very big during the day. So if you are in the area during this period, you should not miss this flower battle and its night festival called the magic night or the night of the flowers then the next day, go to Santander for the roman festival and after for the cantabra wars at Los Corrales de Buelna.