It owns 3 beaches and from the sea, the city seems to have 3 entrances. It is why in the past, people named it Irutxulo (3 holes – translation from the basque) formed between:

Like you can guess, during summer, beaches are very crowded and if you plan to go by car, it is not easy to park not because of few places but because of a lot of tourists. When I go there, I always try first the parking of the Ondarreta beach and most of the time but not always, I get lucky.

The water is not so hot than Barcelona but neither so cold that you can’t swim, let’s say that if you are not afraid of a little cool temperature, you can jump on it, if not a sunbath or visit the town.

This beach is very close to the Igueldo mountain where you can go to have a great view on the city. Walking to the opposite side, straight to the second beach called La Concha, you can make a stop to enjoy the garden of the Miramar palace where you will have a view on the sea and the horizon. 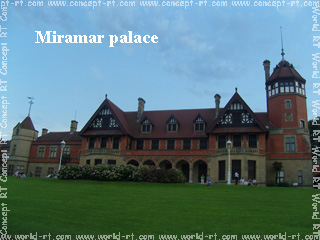 If you have time, I recommend you to go higher until duque de baena avenue 32-46 for another great view on the city (more or less between 10-15 minutes from the palace). La Concha beach is near the downtown so walking until the end and a little more inside the city, you will arrive to the old district by crossing the Alderdi Eder garden, near the city hall.

In this area and around it, there are a lot of bars, restaurants, shops and places to visit like the Alderdi Eder cathedral. During night town, the old district is very crowded and in majority of tapas restaurants, you will be squeezed !!!

By crossing the district, you will arrive to the Kursaal building, the congress and auditorium building after crossing the bridge - one of the beautiful bridges is the one called Maria Cristina. When you are here, you are very close to the third beach called Zurriola. 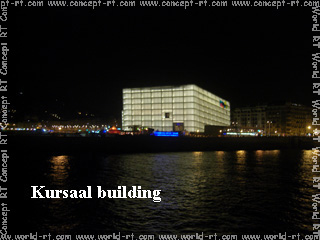 During the “semana grande” (big week) festival, which occurs every year from the 2nd weekend to the 3rd weekend of august, a lot of free concerts are organized in Sagüés area. Fireworks are launched from the walls of the La Concha beach near the city hall and of course the best place to watch it, it is the beach itself. In the Kursaal area, DJs are invited to perform where you can dance during all night in outdoor and more things are scheduled during 9 days.

The international festival of cinema is celebrated normally from the 3rd thursday until the last saturday of september and you can buy your ticket at the Kursaal centre to watch movies (around 6-7€) and/or even for the awards, the inauguration and the closure of the festival (starting from around 25€).

You can pass easily one week in this city and it is very great during summer period with its good temperature, it isn’t so hot like Barcelona. The best it is to coincide your vacation with its summer festival. During winter time, it is very cold and the temperature can fall down until -13 degrees Celsius (8 degrees Fahrenheit) and beaches cover by snow, a great show !!!