It takes always place the day before january 6th because, according to the new testament, the day 6th was the day when the 3 wise men (Caspar, Melchior and Balthasar) brought gifts to Jesus. The procession is a parade of spectacles and magic which begins at 18h from Parc de la Ciutadella to end at 21h at the fountain of Plaza España. To arrive to its destination, it has to pass the following streets:

During its travel, people from the procession throw candies and normally spanish people with their kids try to be the first to catch them and the most possible !!! It is a good opportunity to melt with the local people. And if you want to be the first one to see and to take pictures with the 3 kings, they arrive from boat at the harbor of Moll de la Fusta.

In february, there are 2 main events. The first one is Santa Eulàlia (winter celebration, february 9th – 16th) in honor to the patroness of Barcelona and it is the period to award prizes for arts and science. The second one is the carnival of Barcelona which starts normally the thursday of the 3rd week and which lasts 1 week. The saturday is the parade which starts from the street rambla guipúscoa / rambla prim to rambla guipúscoa / fluvià.

In april, it is the month for lovers when man has to buy a rose for the woman and woman has to buy a book for the man. This celebration is called Sant Jordi (patron of Catalonia and Day of the Book and Rose) and gifts have to be given the april 23rd. From the beginning of the month until this day, you will see in the streets, small stalls selling books and roses. This event is like the Saint Valentine’s day.

During the night of june 23rd, spanish people celebrate the summer solstice called festival of Sant Joan. It is celebrated with fire by fire-crackers and fireworks in different streets to end at the beach where you will find a mass of humanity and some swimming in the cold water of the summer night !!! 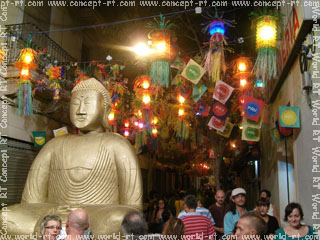 The first one called Fiesta Mayor de Gracia (Gracia festival - august 15th – 21st) which is celebrated at Gracia neighborhood. Main streets of this district is decorated by the local people and they are rewarded by prizes given by juries. During the whole week, spectacles are organized during night time and in some places, there are concerts or music for people to dance. If you want to see the parade, you have to be at the street Torrent de l’Olla (close to Plaza Lesseps) around 18h the first day of this festival.

The second one is called Fiesta Mayor de Sants (Sants festival - august 21st – 31st) and like you can guess, it is celebrated at Sants neighborhood. This celebration is similar to Gracia so streets are decorated, events are organized during night time... And if you are here the first week of october, don’t miss the Hostafranc festival. 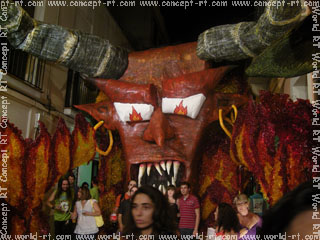 La Mercè (known as Mare de Déu de la Mercè) is celebrated on september 24th. It is the most important celebration at Barcelona and events like music, concerts, arts, air acrobatic, fireworks… are organized not only this day but during the following days (normally during 3 days). If you are coming during this period, don’t miss the parade of the Giants from Plaza Urquinaona to Plaza Sant Jaume passing through Plaza de la Catedral the first day of this festival.

And to end the year, in december from 1st to 23rd, the Fira de Santa Llúcia. It is a celebration to prepare Christmas so in different parts of the city like at Plaza de la Catedral or at Plaza de la Sagrada Familia, you will find stalls which sells natural Christmas trees, wooden figurines… well everything to decorate your home or the room of your hotel !!! 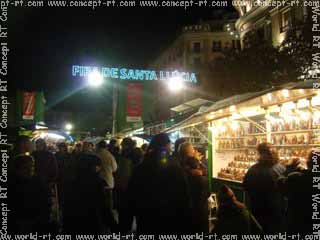