the first written references date back of ends of the 18th century from visitors. During this period, in spite that the celebration was prohibited in the street by Royal Orders, the masked persons (majority of them are from high middle classes) became very famous during the carnival night mixing with the regular people.

During the dictatorship of Miguel Primo de Rivera (1923-1935) and Franco (1940-1975), the carnival has been celebrated of clandestine way and it was renamed as “winter festivities”. In 1965, it was declared as tourist interest and in 1967, the name of “festivity of tourist national interest”.

It was not before the death of Franco that it took back the denomination of carnival and in january, 18th 1980, it reached its higher recognition, declared as “festivity of tourist international interest” by the State Department for the tourism.

In january 2006, citizens, who live in the central zone of the festivities, protested against the high volume of noise created by the carnival and in february, 8th 2007, a judge of Contentious-Administrative of the capital, suspended night dances that were celebrated in the central zone.

The february, 14th, 2007, the Parliament of Canaries approved a new law which allowed the town halls to fix, through a municipal ordinance, the dates in which the environmental legislation of noises would not opposite the general interest.

Nowadays, it is celebrated at the parking esplanade in front of the Maritime Park César Manrique – before it was at plaza de españa. This carnival looks a lot of the brazilian carnival with its parades and dancers and I will say it is the more impressive and beautiful of carnival in Spain which last during the whole month of february. 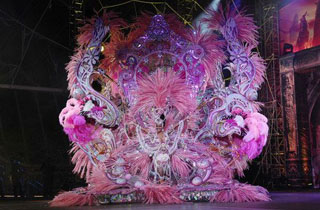