Before to win this title, the party lived some prohibited years during the 50s and only from 1959, it was declared as official and since 1980, the town council provides tomatoes to the participants. Moreover, since 2008, it has its own song called “todo es del mismo color” performed by a local group “Malsujeto”. 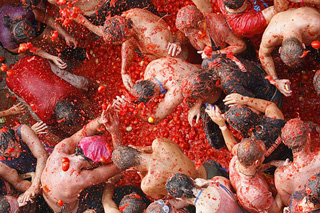 If you want to participate, you need to be at 10h at the main place (plaza del pueblo) for the first act called “palojabón” (stick soap). It consists to climb up on a post greased with soap where on its top part, there is a ham and the person who will be able to remove it, the ham is for him/her and it means the beginning of the party. Meanwhile the crowd sings and dances under a shower with hoses.

Around 11h, a firework announces the beginning of the war and you can start to throw tomatoes to your friends and “enemies”. Some small trucks will get in to provide you some munitions if you don’t bring your own ones but be careful, providers can launch you some in your face for their own pleasure. 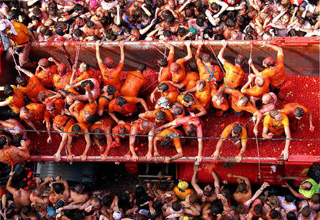 1h after, a second firework will announce the end and the place will be totally red and full of tomatoes juice and you, normally, should be more or less at the same condition with some pieces stick on your body. Fireman will clean the streets with hoses and some citizens will do the same, take advantage to clean yourself.

The tomatoes come from Extremadura, where the cost is very cheap and they are cultivated specifically for this event since they are not good for the consumption so don’t worry to waste the most possible you can during the fight. 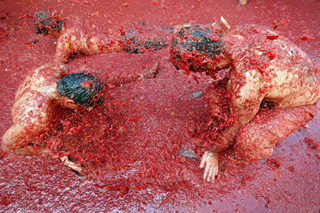 Beside to be “dirty”, when you are daubed of tomato, you wash your skin of impurities since it contains acid and this one cleans by disinfecting it.

Like you can guess, there are some rules to respect:

Except that, some advices:

You can find this funny event in other countries like Sutamarchan in Colombia which celebrates it june 15th or also at Dongguan in China, october 19th.