On the right side, the Liceu theatre which was rebuilt exactly as the former one which disappeared during the fire of january, 31st 1994 and passing the unión street, the Hotel Oriente (1882). To build this hotel, the architects Eduard Fontseré and Juli Mariscal took advantage of the old school Saint Bonaventura designed by the famous architect Pere Serra in the 17th century. 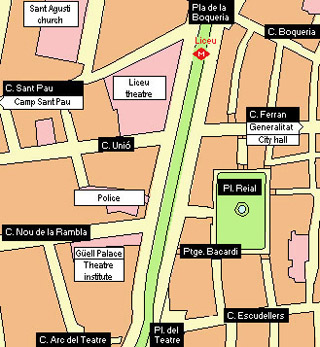 Beside this hotel, there is the headquarter of the municipal police station and if you can take the nou de la rambla street, you will find the Güell Palace built by the famous catalan architect Antoni Gaudí started in 1885 and ended in 1889.

The main face is made of white stone with modernist features. Inside, there is a monumental marble staircase which will take you to the top hall, the stairwell cuts right through the building, making a kind of covered courtyard lit by the natural light coming through the high dome and across from the windows through a screen of columns.

Still going down, you will find the “plaça reial” (royal square) built by the architect Francesc Daniel Molina in 1848 on the site of the former Franciscan Capuchin convent. Later, the iron fountain “las tres gracias” (the Three Graces) and its 2 lamps were introduced in the square. Built by Gaudí, lamps have some arms in different heights as if they wanted to imitate the branches of trees.

The square has been restructured many times and the last time, it was between 1982 and 1983 by Antoni Milà and Federico Correa. Actually, during night time, you will meet some not recommended people who can sell you some drugs. The last portion, on the right side from the south corner, you will find the romantic Bacardi alley which was opened in 1856 and spanned by an iron bridge - originally, the bridge had crystals painted with tropical landscapes. The porticos of the north side have become very famous to be a place to drink beers.

At the end of this section, you will find a lot of painter artists who sell their paintings or you can ask one of them to draw you or make a caricature of your face.

Next, the “rambla de Santa Mònica”.