the right side, you will find the bonsuccés street (opened in 1442) which will bring you to MACBA and CCCB museums located in the former “casa de la caritat” (house of the charity) (also known as “casa de la misericòrdia” – house of the compassion). 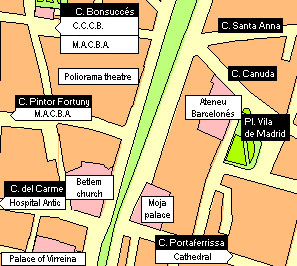 Going down a little more, you will find the theatre “Poliorama” (1912) by the architects Bohigas, Martorell and Mackay located in the ground floor of the building of the Royal Academy of Sciences and Arts (1883).

Near the portaferrissa street, you will find the traditional bird market where majority of the time, the sun hits this side. Some writers have called this part “rambla dels ocells” (rambla of the birds) instead of “rambla del estudis” because there are a lot of sparrows doing their nests in the trees. In fact, actually all along this section, there are animal stands where you can buy not only birds but also rabbits, turtles, mouses... but because of a catalan law from 2004 prohibiting the exhibition of animals which are in sale, they may disappear and replace by souvenirs stands.

Still going down on the right side, after passing the street dedicated to the painter Fortuny, you will find the church Betlem. This former jesuit church had a long dramatic story, burnt in 1671 and rebuilt in 1680 by Josep Juli, it has been totally destroyed in 1936 because of the fire and rebuilt again in its original architecture where the main entrance is located at the carmen street.

On the left side before to arrive at the church, the canuda street will bring you to the square named “vila de Madrid” (villa of Madrid) where you will find a nice garden and visit a roman necropolis discovered by a civil war bomb (1936) !!!

Still on the left side, on the corner of the portaferrissa street, there is the Moja palace (known also as palace of marquis of Comillas). The building was created in 1702 by Pere de Cartellà and since 1981, the Department of Culture of the Generalitat (Autonomous Government of Catalonia) has its office there. In the top floor lived Mossèn Cinto Verdaguer and his room has been conserved as it was when working as almoner of the marquis of Comillas and where he wrote the poem “Atlàntida”.

Next, the “rambla de les flors” (rambla of flowers).